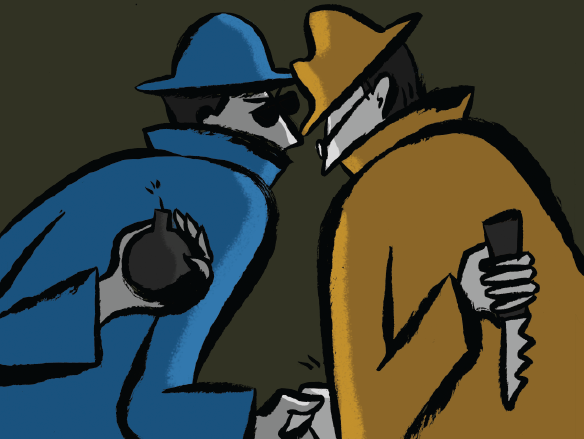 In consulting, human capital is everything. Real experts are rare and have long been fought over, especially in a growth region like the Middle East where cultural compatibility is a key need. Now it looks as if the region’s scarcity of qualified consultants is taking the war for local talent to a whole new level. This is the first installment in a three part investigation into recent developments at Strategy& since it combined forces with global services organization PwC. Read part II here.

Their offices are located on what feels like the central corner of downtown Beirut. From their conference rooms and executive offices the view sweeps across the headquarters of Lebanon’s largest bank and the premises of the nation’s top couturier to the city’s flashiest high end office addresses.

But what makes the presence of consulting firm Strategy&, formerly Booz & Company, at the physical core of the Lebanese business landscape truly noteworthy is not the location’s air of money and corporate importance. It is the company’s history of stay. It has been here since this part of downtown was rebuilt — which means operating a top tier Beirut office for more than a decade, even though the Lebanese consulting market is strictly little league.

A tale of two Edwins

Strategy& is an uneasy name for a consulting firm. Many will tell you — and opine — that the old name, Booz & Company, was so much more memorable as it carried the storied image of a full century of consulting dating back to one Edwin Booz who hung out his shingle as presumably the world’s first commercial consultant in Chicago back in 1914.

However, in 2013 the global partners — and hence owners — of Booz & Company had no choice but to give up that brand in order to join forces with another storied name (and much bigger company): professional services corporation PricewaterhouseCoopers, today branded as PwC. The merger meant that a clause in an older deal between Booz & Company and sister consultancy Booz Allen Hamilton had to be obeyed — a stipulation of the demerger of the company that was operating globally as Booz Allen Hamilton until 2008. This demerger had established BAH as a US focused firm whose revenue stream originated more than 90 percent from defense, intelligence and other government work and provided Booz & Company with a hold over international markets. The newly segregated siblings were not to penetrate into each other’s territory for three years, until late 2011, and if Booz & Company were ever to merge with another player, it would have to discontinue using the Booz brand.

Yet the new deal with PwC did not deprive Booz & Company of association with a time honored name. PwC’s roots date back to the mid 19th century and to prominent London based accountants, including one Edwin Waterhouse.

When compared with the Gulf region, “we don’t have many clients in Lebanon,” acknowledges Joe Saddi, senior partner and chairman of Strategy&’s Middle East business. “In business focus, the firm follows GDP, from the biggest down,” he says, and names the region’s primary markets for consulting services as Saudi Arabia, followed by the United Arab Emirates and then Qatar and Kuwait.

Ask the top person at the Lebanese lair of this globally active consulting firm why they maintain an expensive presence in Beirut, and Saddi will tell you that they are here because of Lebanon’s most valuable resource: “We are in Lebanon mostly because of the talent.”

And while the name Strategy& may not yet ring a bell with people who look up a consulting firm only when they need to restructure or reinvent their company, this company has been plugged into the industry’s spinal cord since its beginnings in the industrial environs of Chicago 101 years ago. Then, the company’s name appears to have been “Business Research System”, but it became known through a succession of later monikers which all included the term Booz, after its founder. Last year, however, Booz & Company made a big move by combining forces with another global services organization, PricewaterhouseCoopers (PwC), and had to drop anything ‘Booz’ from its official identity because of a contractual obligation (see box).

Making it on the local stage

While other consulting firms with global repute — the likes of Boston Consulting Group (BCG), Bain & Company, McKinsey and so forth — have bypassed Beirut in recent decades and put all their regional offices into the GCC basket or perhaps into Egypt, the Strategy& organization’s Beirut office has given the company an edge in recruitment and boosted its human capital.

George Sarraf, a Strategy& energy partner and veteran of its Middle East consulting activity reminisces on how the company has been accessing Lebanese talent ever since he joined its then regional base in Abu Dhabi in 1996. “Lebanon is an important source of talent for us and it always has been since we first opened an office in the region,” he muses.

According to both Saddi and Sarraf, talent — and competition for talent — are defining issues in what they call the premium consulting industry, whose management and strategic advisors regularly have to interact with senior leaders in large corporate and public sector organizations. “The biggest challenge you have is access to talent and to maintain talent. This is the element that constrains growth the most and that is why there is a lot of fighting around talent within this industry,” Sarraf explains.

In Saddi’s words, Strategy& was able to draw in local talent more effectively than other premium consultancies over many years, but as he concedes, outbound talent migration at the top tier of partners in the company was part of the company’s transition from a standalone firm to alignment with global giant PwC. While the majority of regional partners, according to him, voted in favor of the tie up with PwC in the fourth quarter of 2013, “around 10” partners left the firm between the vote and mid 2014. According to comments by Sarraf in September 2014, the issue was under control at that time, because the majority of partners remained with the organization, only a minority of departees from various ranks went to the competition and new hires came aboard. “[When looking at] the net — net of how many people have left and how many have joined during this period of time — I would not say it is a wash but it is a near wash,” he enthused.

But when wrapping up and rechecking its research into the regional human capital of partners and consultants in January 2015, Executive found signs suggesting that Strategy& has been recently embroiled in a veritable talent battle.

As of December 10, 2013 — a mere fortnight before Booz & Company partners took the final vote to join PwC — the company’s website listed 27 partners in the Middle East. As of mid January 2015, here’s where each of them were.

Comparing the lists of partners on Strategy&’s website and other sources from last month with a version of Booz’s cached by nonprofit outfit The Internet Archive, one finds that 12 of 27 Middle East based partners left the company between December 2013 and January 2015.

While this sounds grave enough in a business where partners are crucial players for reputation, expertise and also for bringing in clients and contracts, the defections of partners over a slightly longer period from March 2013 until January 2015 seemed counter indicative to Sarraf’s suggestion that “only” a minority hitched with regional competitors.

Of partners who vanished from Booz in that period to reappear elsewhere in the consulting industry, one moved to Ernst & Young in a global role; two others became partners at McKinsey in the UAE; and a fourth claimed on their LinkedIn profile that they moved from Booz to join A.T. Kearney in Dubai in January 2015 (however, their name had not appeared on the A.T. Kearney website as Executive went to press).

Taking the total count to eight, three partners jumped to BCG in the Middle East and one to BCG in Europe. Lastly, as the hammer in this game of rotation, consulting firm Booz Allen Hamilton (BAH), which started pushing into the Middle East after a noncompete agreement with former sibling Booz & Company expired in Q3 2011, in October 2014 presented three recently departed Booz seniors plus another Booz alumnus as new BAH partners and part of their new MENA leadership team — led by yet another Booz outbound migrant as the MENA team’s new “executive vice president and managing director”, according to the press release (see box).

Moreover, the migratory pressure has not been limited to the top tier of partners, vice presidents and so forth. For an informative, albeit not statistically representative assessment of migrations in the rank and file of the Strategy& and BAH organizations, and in an effort to find direct crossings from the former to the latter, Executive reviewed some 42 LinkedIn profiles of analysts, associates, senior associates and principals who indicated employment by either of the two companies in their online profiles.

According to their profiles, most of which were posted by persons with last names that indicate a possible Lebanese nationality, 20 individuals — almost half of the interconnected profiles which we accessed — left Booz–Strategy& between mid 2013 and end 2014. And all but a few of these individuals indicated that they moved without any intermediary employment to BAH.

That, one assumes, cannot be a boon for an organization whose defining capital is human.

Correction: When counting partner departures from Booz–Strategy&, a previous version of this article inadvertently put the time period under consideration as March 2013 to January 2014, instead of to January 2015. Apologies.

Continue on to Part II

“Booz and PwC: It made sense on paper”