Beesline: The new buzz around town

Maha Arayssi Rifai and Mohamad Arayssi were recently selected to join Endeavor’s network at the non-profit’s latest International Selection Panel in Dubai. The brother-sister duo founded the personal-care products company Beesline with siblings Roula Arayssi Chehab and May Arayssi Baba in 1993. Their admission into Endeavor is exciting news for all parties, as they are the first family business to enter the Lebanon network.

“We’re quite excited about it because we would like to take on more family businesses that fit our criteria,” said Tarek Sadi, managing director of Endeavor Lebanon. “I think they represent a lot of what Lebanon has to offer.”

Endeavor is an international nonprofit organization, headquartered in New York, that helps emerging economies develop by offering advice, mentorship and access to markets. Companies that join Endeavor’s network have to go through a rigorous selection process and open themselves up to the organization’s suggestions.

According to Sadi, out of the 350 companies that they looked at in Lebanon over the past three years, only 11 companies were chosen to join the network.

In 1993, Rifai, a pharmacist, and her brother Arayssi, a chemist, were experimenting from a small room in their family’s house with different beauty creams and concoctions on a Bunsen burner. Rifai carried out research on natural extracts, while her brother worked on stabilizing the formulas. They now hold the titles of vice president and CEO, respectively.

Since the early days, Beesline and the other brands from the Natural company have expanded to regional and international markets: Saudi Arabia, Kuwait, Iraq, Jordan, the Emirates, Oman, Yemen, Morocco, France and the US. Some of these were ‘white labeling’ — where they made custom products that would appear under another company’s logo.

Their impressive growth was one of the reasons Endeavor selected them to join the network . “Having a production of that caliber in Lebanon selling to the region is not something that we see every day, having that kind of growth,” says Sadi.

They base their products on the science of apitherapy, which uses materials derived from natural bee products. They are certified by the International Standardization Organization and are in the process of obtaining the Good Manufacturing Practice certificate. They do not currently have an organic certificate, which Rifai attributed to the high yearly fees involved in such a certification as well as disagreement within certification bodies over what is organic. 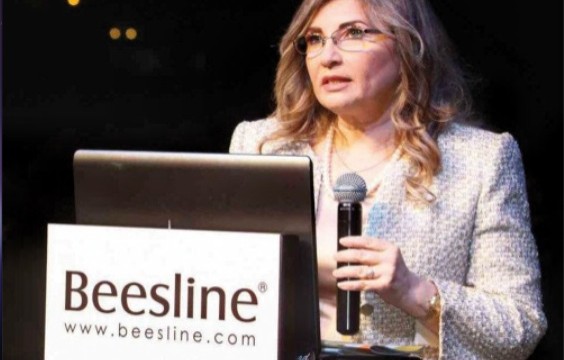 They currently have six chemists working in the research and development lab just on formulas. “We are always trying to get better and safer formulas,” says Rifai.

Charting a new course
Since they entered Endeavor’s network, Beesline has begun to chart a new course in its strategy.

Formerly offering diverse lines of products, many of which were custom-made, they will be closing some operations to hone in on others. Based on recommendations from Endeavor, they will be focusing on their whitening line. “It’s a trend and we have to open new markets in the eastern region such as Pakistan, a Muslim country. Our product is halal. It doesn’t contain any animal-origin products,” says Rifai.

Halal personal care products are less common, since most products use alcohol or animal ingredients where the animal has not been slaughtered in a halal way. “We are free from animal ingredients,” says Rifai, adding as a disclaimer that vegans consider beeswax an animal derivative, but it is still considered halal.

Specializing in products with the most potential will allow them to automate some of their lines of production. They currently have a factory in Bchamoun and will be opening another one with automatic machinery. For this, they took a $4 million bank loan over seven years to purchase the machines.

Sadi foresees that the new factory will increase their workforce in manufacturing by 20 to 30 percent as they expand geographically.

Beesline currently has 180 employees, all based in Lebanon. They’re hoping that they can avoid downsizing even as they automate production. “Maybe they will stay but we will not grow bigger. We will re-assign the jobs,” says Rifai. “We planned to make the company have a lot of employees but it doesn’t give back much money to develop more or to grow bigger.”

They will also be closing their retail store in Hamra in the next month, since it is no longer profitable. Rifai cited not enough marketing, “and we have to concentrate on our main business which is the production.”
Another suggestion from Endeavor was to increase marketing efforts. “We faced [this issue] during the international selection panel. Everyone said we have a great product and great business, but we didn’t focus on the marketing.” One advisor who offered his assistance was Roy Haddad, who had previously done a study on marketing in Islamic countries.

Before they joined Endeavor’s network, the company did not attribute time or budget toward marketing. The expansion of their products happened organically through word of mouth.
letting go

Beesline has already recruited some new managers, a sign that they are slowly relinquishing the reigns on the company and opening it up to outside expertise.

They hired a marketing manager who had previously worked for L’Oreal for 12 years along with financial and human resource professionals.

When asked whether the family was taking a step back, Rifai said, “Yes, because managing the business is one thing, and working at developing formulas is another.”

“We had a local panel [hosted by Endeavor], and they told us that if we wanted to go global, we have to forget about the family and to become like an institution,” she said. “We were okay with that and they said you have to be open to all suggestions, have to accept change. We are no longer involved in every small detail.”

Although they are bringing in professionals from outside the company, they are also thinking of bringing in May Arayssi Baba’s son as the new CEO. He holds an MBA from the US and has experience working at Paypal and the Boston Consulting Group.

“In general, it’s about the best person for the job,” says Sadi. “Whether that person is from within or outside family, it doesn’t matter.”

Although they are no longer in charge of every decision, the four founding family members are still the only shareholders on the board. The management team and the CEO still report to them, so they still exert some control over operations. “It’s about layering — keeping control through shareholder structure,” explains Sadi.

They have not yet opened up their equity, but this might be something they will consider further down the road. They already had two propositions — one from Abraaj Capital, who offered them a deal for a slice of equity, and another from a Saudi businessman who works for prominent Saudi family the bin Ladens but who made the deal of his own accord. They declined both offers because they were not happy with the terms.

Working with a family
Family businesses in Lebanon have garnered a reputation for lacking in efficiency and transparency. According to Sadi this is not the case for all.

Sadi claims that the only real difference in approach they have undertaken for dealing with a family business was an attempt to engage the rest of the family co-founders. Only two of the four sibling co-founders were selected as Endeavor entrepreneurs because they were the most active.

With guidance from Endeavor, Beesline’s team hopes to see the company grow rapidly over the next five years. Sadi is also enthusiastic about the company’s potential: “a business like that — with the right strategy, with the right support — I wouldn’t be surprised if in 10 years time they become a $100 million business. They play in a niche market, but it’s a growing niche.”