Dubai, the commercial hub of the United Arab Emirates, has reported a 11 percent increase in hotel guests to 11 million persons, according to a March 4 report by the Dubai Department of Tourism and Commerce Marketing (DTCM). In 2012, the number of guests across all hotel categories stopped just short of the 10-million bar, at 9.96 million.

The emirate has, in fact, hopped across two memorable achievement markers in one year – thanks to an 11 percent spike in the number of guest nights. With an average length of stay of 3.8 nights per guest, the total count of guest nights grew to 41.6 million. Due to higher average room prices at both hotels (+7 percent) and hotel apartments (+4 percent), hotel operators reaped $5.95 billion (AED 21.8 billion) in revenues, an impressive 16 percent increase from $5.1 billion in 2012.

Lebanese guests contributed to the increase with 112,000 visitors, up 12 percent from the previous year. 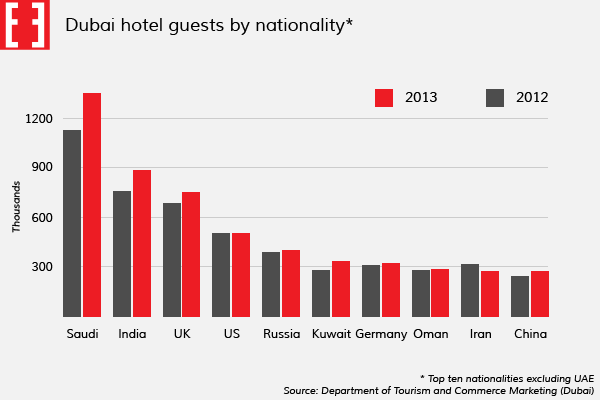 The top source country for Dubai visitors and the biggest gainer in absolute numbers was Saudi Arabia, with 1.35 million citizens booking Dubai accommodations in 2013. That was up 20 percent from 1.12 million in 2012.

The emirate’s hotel operators recorded their biggest increase in percentage terms for Australians. The number of travelers from Down Under leapt 39 percent to 269,000, something which the DTCM attributed directly to a new partnership with Qantas that started on April 1, 2013.

Greater visitor inflows from China (up by 11 percent) were described in a DTCM statement to have come “partly as a result of the targeted marketing activities in China” by the organization. However, the release also noted that Chinese tourists generally have a growing appetite for international travel.

Besides Saudi Arabia, the top five countries from which Dubai’s tourists originated were India, the United Kingdom, the United States, and Russia. Between them, these five countries were home to more than 35 percent of Dubai’s hotel guests in 2013.

Only one country among the top 20 source countries of Dubai visitors was shown as having negative growth in 2013, and this was Iran – with a 14 percent drop to 278,000. DTCM volunteered no suggestion as to the reason. 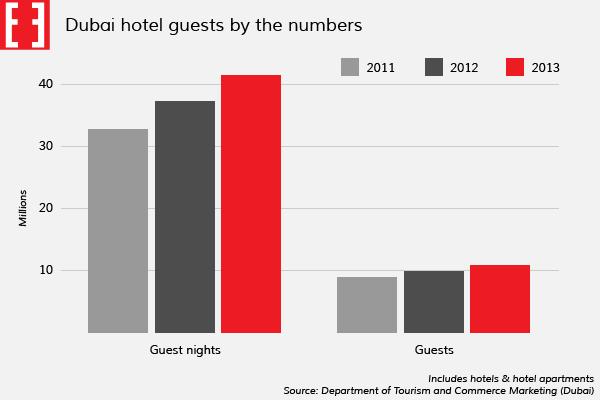 While the number of hotel rooms and short-least hotel apartments increased 5.1 percent to 84,500, occupancy rates improved to above 80 percent in both categories, suggesting that Dubai hospitality operators could flash hefty smiles for the second year in a row when tallying their growth in revenues, and presumably profits. According to data in the DTCM statistics the hotel sector’s revenues increased by almost 38 percent from 2011 to 2013.

In the opinion of DTCM, Dubai hotel operators have every reason to look optimistically into the future even as another 29,000 plus rooms are in the pipeline for 2014 to 2016. This is because the emirate has a target to welcome 20 million annual guests by 2020.

“In order to provide accommodation for our targeted visitor numbers for 2020, we estimate we need a total of between 140,000 to 160,000 rooms and will work closely with the investment industry to make this happen,” said DTCM Director General Helal Saeed Almarri. Dubai is actively pursuing investments into its hotel industry and has created incentives for developers of mid-range hotels.