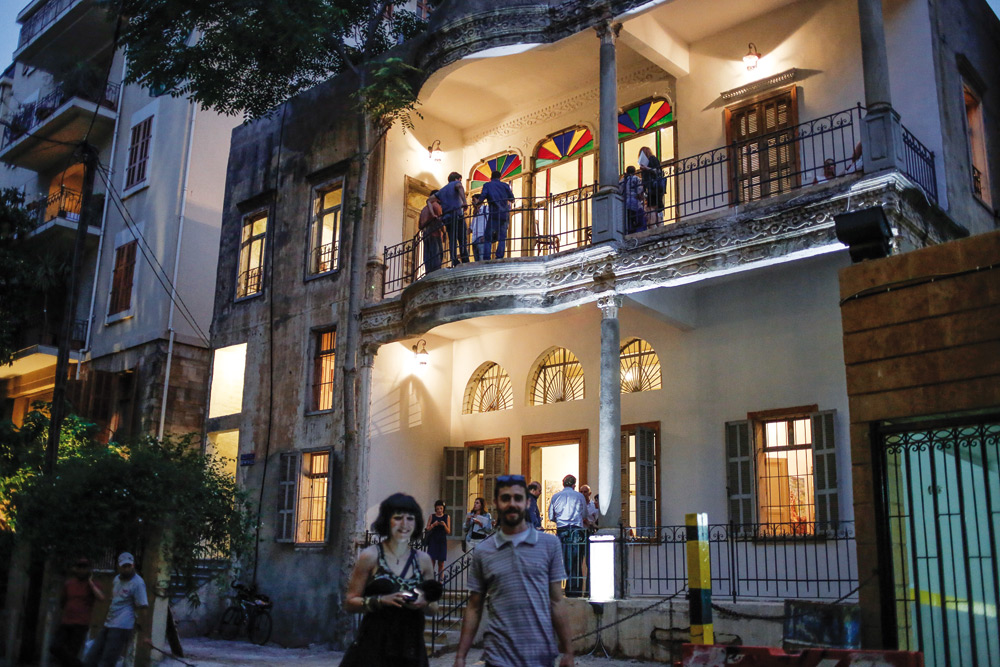 British artist Tom Young and his wife were taking a stroll through Gemmayze’s back streets when he caught a whiff of the sweet scent of jasmine. As he stopped to smell the flowers, he was struck by an “absolutely beautiful” villa that stood before him. Jaded by the traditional white cube galleries in which he was exhibiting his work, he had been looking for a new space to hang his art, and he knew this building was it.

From that New Year’s day five months ago, the long neglected “Villa Paradiso” was given a breath of new life due to an uncanny confluence of Young’s inspiration and a family’s vision. The classic villa dates back to the turn of the last century, though it was a dilapidated façade forgotten under the shadows of surrounding tower blocks in the heart of Gemmayze until recently. It opened its doors on May 30 as a thriving arts and cultural center that tells of Beirut’s eras past.

A match made in heritage

“Our heritage is [like] our skin; we don’t want to peel it off and replace it with a new skin. It is very important that these elements of our culture are shown to the public and not left to disappear or even be sold away,” said Remi Feghali, a member of the family that owns the building. He is the architect overseeing its restoration and renovation.

When Young contacted the Feghali family, a relationship was forged that, in the words of Remi Feghali, “we… completed one another’s vision.” The Feghalis are active in preservation and own a handful of heritage properties.

They bought Villa Paradiso — a name bestowed by the family — seven years ago for a “six-digit figure” from a successful Armenian family, the Baloumians. The last person to live in the house was the family patriarch, Mardiros, who had escaped the Armenian genocide in 1915, fled slavery and gone on to become a successful contractor, tradesman, philosopher, photographer, actor and writer; he refused to flee to the United States with the rest of his family in 1975 and died in Beirut, aged 88 in 1983.

Initial renovations were done to the roof, which had been damaged by shelling in the war, but beyond that the building was left dormant.

The villa is a weathered reflection of Beirut’s past. It was built over several stages stretching from the late 1800s to the late 1920s. The building carries typical features from this period, such as a beautiful, triple-arched window on the first floor, lofty ceilings and classic tiled floors in the style of Beirut’s late Ottoman era. The mixture of the European and Ottoman influences that pervaded Lebanese life in this period define the architectural style; the aspirations of the thriving merchants that lived here are almost palpable.

As the Feghalis and Young fleshed out their vision for the building’s restoration and the art exhibition, they preserved the character and identity of the building with only modest renovations. Young, who is a trained architect and craftsman as well as an artist, served as the liaison between Remi Feghali, the architect, and the tradesmen who carried out the work.

It was not just the physical structure that inspired the artist’s project but also the artifacts of the Baloumians. Musical scores, photo albums, an Armenian typewriter and vintage furniture told of lives that had long since departed the building. Young took a sunny front room on the first floor of the building as a studio to work among the relics and artifacts from those forgotten days.

“When I moved into that room, with all of the history and memories that it holds, my work went to a completely different level,” he said. Young adorned the walls of the Baloumians’ past home with his interpretations of the faded, sepia-hued memories of their lives in Lebanon, such as summer lounging on Ramlet el Bayda beach and footloose frivolities at Beirut dancehalls.

A future in the past

“It is a combination of nostalgia and somehow looking into the future. A kind of tension between the past and the future, because a lot of the pieces call you to reflect on what could be — at least for me. But I am thinking a lot about that these days: what Lebanon could be, what it was, its potential,” said local resident Edward Stockman-Allen at the opening.

The Feghalis hope that the transformation of Villa Paradiso into a cultural space will serve as an inspiration to other investors to see the value in similar properties and to think creatively about potential uses that not only preserve but also revive heritage. “What we try to convey through Villa Paradiso for those who don’t know what to do with these houses is that they can be used in plenty of ways; museums, galleries, hotels, residences, restaurants, you name it,” said Remi Feghali.

Despite the damage to the roof from the war, Villa Paradiso had by and large been well preserved, with the original windows and door frames and tiled floors still in place. “I have been amazed by the selling off of heritage through the black market. Houses are literally having their organs ripped out to be sold everywhere, so identity is ultimately lost. We want to keep the DNA of this house,” explained Feghali.

The resurrection of Villa Paradiso is not merely about a passion for heritage but also a calculated business investment. The new cultural center will generate revenue by hosting art exhibitions, and the restoration of the property will at least maintain its value, if not significantly increase it. “We are doing this both as an investment and out of our love of heritage. The love of heritage does not stop at looking at a ruin; you have to maintain it so that it doesn’t disappear,” said Feghali.