Watching sports is often a group activity and viewing the World Cup in Lebanon is certainly no exception. Every night since the onset of the games, crowds gather around TV screens, at home or in commercial venues, and loud cheers mixed in with the occasional firework are a common celebratory occurrence.

World Cup fever strikes the country at full force every time, and commercial venues once again find themselves in the familiar position of first trying to lure viewers away from the more cost-effective home gatherings, now that the games are being aired for free, and to attract them into their venue as opposed to competitors.

Keeping in mind that the broadcasting rights’ contract for commercial venues is different than the home viewing deals and comes with a much heftier price tag — starting at $3,000 and going up to $20,000 according to Mohamad Al Khatib from MK Electronics which supplied most commercial venues in Beirut with the beIN satellite receiver — one has to wonder if this investment is a wise one, and if hospitality venues will get a good return for their buck.

One type of commercial venture that is successful in capitalizing on the football hype is that of the pop-up venue constructed especially for World Cup viewing, such as Beirut Fan Park (BFP) in Beirut Waterfront or the Hyundai Football Village in Zaitunay Bay. Such ventures typically recreate the feeling of watching the games live through stadium style bleacher seating, huge LED screens and half-time entertainment such as mascots or cheerleaders. Loud and fiery, they are favored by diehard fans or by those looking for a change from restaurant viewing.

Entry fees start off at $7, depending on the park, and can reach up to $20 toward the final games. Organizers rely on sponsors to cover most of their investment; Hadi Hibri, one of the partners in VII Management which is organizing BFP, says they invested over $300,000 into the park including the broadcasting rights — but that sum was mainly covered by their 30 sponsors, and the park itself was “supported by Solidere.” Hibri explains that they also rented out the spaces in their food court to a variety of eateries at a fixed price, thereby increasing their profit margin as well. Solicet, the team behind Zaitunay Bay’s park, also lists around a dozen sponsors and supporters who covered most of their event’s fees.

World Cup parks also aim to increase pedestrian traffic in the surrounding area. Amal Khoury, communication manager at Zaitunay Bay, says they offered the venue to Solicit because “we were interested in the footfall to encourage the restaurants’ business and to allow those who don’t want to be in a restaurant to view the games in the public areas of Zaitunay Bay.” 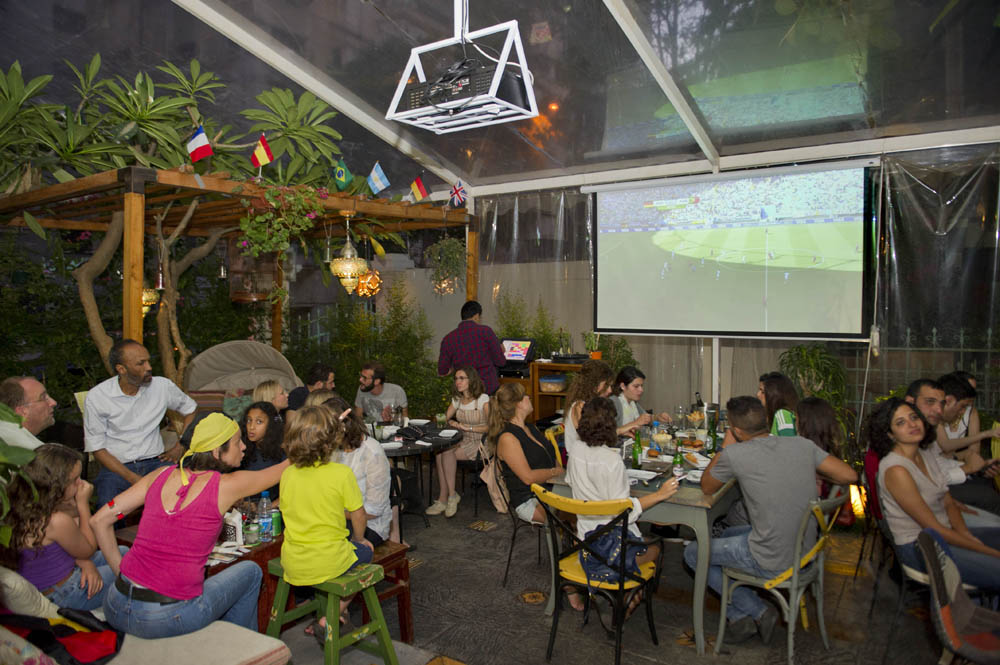 Nil-nil for some restaurants and bars

Meanwhile, restaurants and bars have mixed feelings regarding the season’s impact on their venues, acknowledging the increased footfall but saying that it’s generally not matched with a significant increase in revenue.

Charlie Freim, owner of Garcia’s in Hamra and Central Station in Mar Mkhayel, sees screening the World Cup as an added value service he provides his customers which doesn’t make extra profit during the World Cup season; in fact he makes around 30 to 35 percent less than the usual average when the place is full. “People generally tend to consume less during the games and focus more on beers and appetizers rather than cocktails or meals. Also, many times it is just men alone who come to watch the game so they spend less than when they come with a group that has women,” explains Freim.

Turnover is also lower during the games. For Toni Rizk, CEO of Tri Concepts which runs several pubs on Downtown’s Uruguay Street, many customers spend over three hours in the venue over just a couple of beers.

Faced with this situation, many bars and restaurants are offering set menus of drinks and appetizers, or discounts and promotional items, in an effort to both build hype around their venues as the place to be during the World Cup and ensure at least a minimum order, which would go toward covering their cost.

Other venues cover part of their World Cup investment through sponsors; Creditbank sponsored the broadcasting rights fees for Casper & Gambini’s for example. None of the venues Executive spoke to opted for minimum charge strategy as that would drive viewers away.

However, all restaurants and bars Executive spoke to said that it would not be viable for them not to air the games while their competitors are doing so right next to them as that gives others an edge over them. “We show the World Cup because not doing so means that our customers would choose to go elsewhere during that period,” says Rita Saati, marketing officer at Roadster’s.

Ussama Makarem, CEO of Clé Bar in Hamra, feels that broadcasting the World Cup would not make mathematical sense for smaller venues as people generally choose to watch the games in larger venues and so their returns won’t add up. However, for Clé, which has a seating capacity of 120, Makarem says he would be losing profits and clientele if he didn’t air the games.

Despite the claims of flat profit margins, many venues report that footfall does increase during World Cup month, especially during weekdays when people are normally more inclined to stay at home rather than go out.

Speaking for The Peninsula in Dbayeh, Maryse Tebcharany says they have been fully booked since the opening match and have had to “reject tens of reservations each night to maintain quality.”

As the World Cup carnival rolls along, it seems that the hospitality venues should avoid focusing on the profit lines and just enjoy the games. “This is one of the biggest events on Earth: you have the most people who watch it all over the world and it happens once every four years, spread over 31 days. I personally enjoy festivals and think it’s also nice to have a good time,” says Makarem.

I’d like to share a very flummoxing situation I experienced this weekend at Petit Cafe on Cresus Street in Antelias. Nowhere do they advertise a cover charge, but they slyly drop it in to the tab: 10,000LL per person! And they justify it by claiming the fireworks and special exotic dancers trotting around in their outdoor seating section during half time won’t pay themselves. Moreover, their “special” menu contains everything BUT the appetizers you’d want to munch over the World Cup, so say you order a plate of nachos, management will pretend they’re doing you a favor serving them to you and then accost you with a 16,000LL price tag for some rancid sour cream and plasticized cheese. Since it’s not on their special menu, they’ll ring it up at the price of their shrimps platter. Coke? 6,000LL a pop!! We walked out troubled and furious at having been gypped!