Everywhere in Lebanon, it seems there are so many international flags festooning balconies and fluttering from cars that one could be forgiven for thinking that numerous foreign dignitaries are visiting the country — or perhaps establishing mobile branches of their embassies.

In reality, all this is merely a Lebanese way of preparing for the World Cup and showing support for people’s favorite teams. The fact that the national team has never qualified for the World Cup does not appear to have affected people’s enthusiasm for the event, instead bolstering their loyalty to other popular teams. This loyalty is widely demonstrated during each international event through the display of some country’s flag, and the bigger the better.

So where do these flags come from? Lebanese wholesalers of Chinese manufactured seasonal novelty games and gift items begin ordering flags directly from China at least four months in advance to ensure timely delivery, according to Hanna Daouk of Khalil Ismail Establishment, a Lebanese wholesaler that was commonly cited among the shop owners Executive spoke to.

Many of the smaller traders buy their flags from such wholesalers and resell them at a higher price to make a profit. Aside from Khalil Ismail Establishment, Safawi Establishment and Hannoun were other frequently mentioned names. “We order around two large crates of flags, so we have approximately a hundred flags for each country we order, aside from the various gadgets, and we manage to sell all our stock to various shop owners in Lebanon,” says Daouk.

Wholesalers and smaller vendors alike are careful to invest mainly in the most popular countries in Lebanon or the ones with the strongest teams, lest they be left with too many unsold flags. “In general, we finish our stocks of Brazil and Germany’s flags first as they are the most popular teams in Lebanon. Next come the Italian and Argentine flags, and we don’t even bother getting the other flags,” says Zaynab El Hassan, manager of the toys purchasing section at Karout Grand Stores. She adds that with experience, they can now get almost the exact number of flags they need — around a hundred for each of the main countries — and not be left with any surplus.

Vendors are also careful not to invest in too many flags in case a team experiences an unexpected loss from the onset of the world cup and the rest goes into stock until the next international event. “You have to know football and make your calculations when you are buying flags or you will not make up for what you spent,” says Ramzi Aswad, an automobile accessories shop owner who also sells flags and novelty items during the World Cup season.

Despite their best efforts, most vendors end up with leftover flags after the championship, an outcome which most don’t mind as they say they can always resell them during the next World Cup or any international sporting event as “flags don’t change,” says Aswad. [media-credit id=1966 align=”aligncenter” width=”580″] 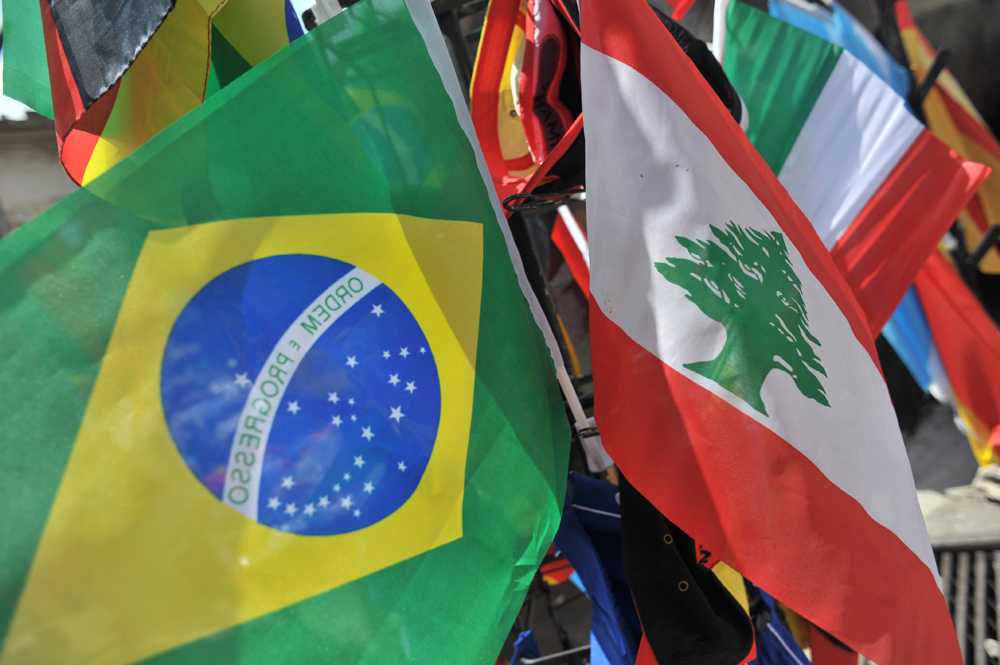 Competition around a competition

Still, the desire to sell the biggest amount possible leads to an ‘early bird gets the worm’ situation with shop windows displaying all varieties of flags and memorabilia about a month and a half before the World Cup. “You have to be the first in your neighborhood to show your flags because people buy them only once in the season … and also because your display will then stick to their minds when they decide to buy a flag later on,” explains Saleh Jummaa, an owner of a grocery shop in Qoreitem which sells flags year-round but only promotes them during international events.

Flag prices vary according to the size and the country. The flags of the more widely available countries are sold at a lower price. In general, prices range from a dollar for a 50 centimeter flag from a street vendor up to $50 for a 3 meter German flag.

Fans of uncommonly supported countries such as Ghana or Uruguay will have to dish out extra cash and put more effort into finding the flag of the country they support. Jummaa, who has flags of all participating countries, explains he sells a meter long flag of Uruguay for $6 while he would sell the same sized flag of Brazil for half the price. “It is rare so of course it is more expensive,” he says, adding that he can custom make any flag requested for an extra charge.

Luckily for Lebanese optimists, the cedar flag should be in plentiful supply for years to come.