Home The Buzz Live fast, die young – do Arabs do it better?

Live fast, die young – do Arabs do it better?

The United Arab Emirates is the riskiest place in the world for getting killed in a road accident but only when compared with the statistical probability of dying from cancer, heart attack and stroke. New comparisons of leading causes of death by scientists at the University of Michigan Transportation Research Institute (UMTRI), show that the number of people dying in a car crash in the UAE is almost one in six of all fatalities related to four causes of death, namely – in scientific lingo – malignant neoplasm, ischaemic heart disease, cerebrovascular disease and road crashes.

Using five-year-old data from the World Health Organization, the UMTRI scientists compared the number of road accident fatalities to the three other leading causes of death around the world on a country level. They arrived at percentages that showed the Middle East looks prima facie like a barrel of untenable risks – to the point that the University of Michigan’s news department opined in a February 20 release, “The next time you go to Africa or the Middle East, you may want to stay off the roads.” 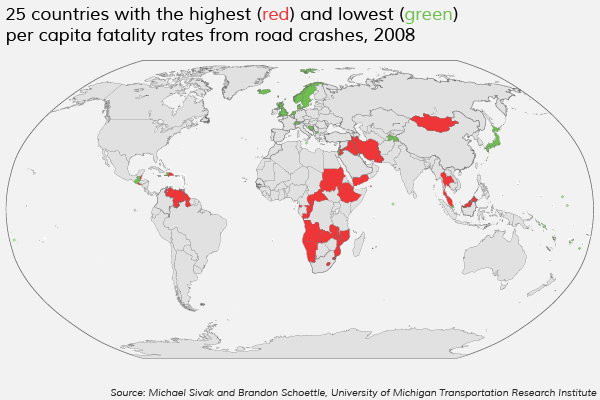 The release cited the new UMTRI research report’s findings that the UAE and Qatar, with 15.4 percent and 14 percent respectively, have the highest percentages among 193 countries for road fatalities out of the four causes of death, versus a world average of 2.1 percent. It added that of the 20 “worst” nations for this ratio, 12 are from the Middle East, while a dozen African nations are among the 25 countries with the highest fatality rates from road crashes per 100,000 people, along with 10 nations from the Middle East and Latin America.

A dig into the 45-page research paper uncovers further that people in Qatar are five times more likely to die in a road crash than from cerebrovascular disease such as brain embolisms or aneurisms. In terms of the list of countries with the highest percentage of road fatalities from all causes of death, the ten most affected countries indeed include six from the Middle East.

However, and it is a humongous however, the Middle East region stands out with a high ratio of road deaths among the fatalities by the leading causes of death not because of exorbitantly high road fatality rates but because of their low rates for other causes on the list. As the UMTRI paper notes timidly on its final page before references and appendices, “the United Arab Emirates and Qatar are the two countries where fatalities from road crashes represented the two highest percentages of fatalities from all causes. This is the case primarily because these two countries had the two lowest fatality rates from all causes. (Their rank order in terms of the fatality rate from road crashes was only the 32nd and 60th highest, respectively.)”

In other words, the ratios for road fatalities in these and two other countries in the Middle East are high because by 2008 counts, the countries had low incident rates of the diseases. Matter of fact, in the table showing the total number of deaths when adding up all four causes, the world average of 844 per 100,000 population reflects a range going from 1,717 in Chad at the high extreme to an absolute low of 141 in, yes, Qatar. On top of that, six of the eight countries with reported death counts below 400 per 100,000 in 2008, were in the Middle East: Qatar, UAE, Kuwait, Bahrain, Oman and Syria.

That does in my view not imply that the region is the place to live for having a much lower probability of being afflicted by one of the three killer diseases. Nor does it mean that roads in the UAE and elsewhere in the Middle East are low-risk.

To this observer, the study findings suggest primarily that more research on real medical incident rates and traffic-related deaths in the region is in order; that the young population profiles of GCC countries and the comparably low rates of fatalities from cancer, stroke and heart attacks are calls for caution and investment in wellness considering the oil-rich Arab nations’ high propensity for lifestyle diseases; and that much needs to be done to reduce the number of road crashes. 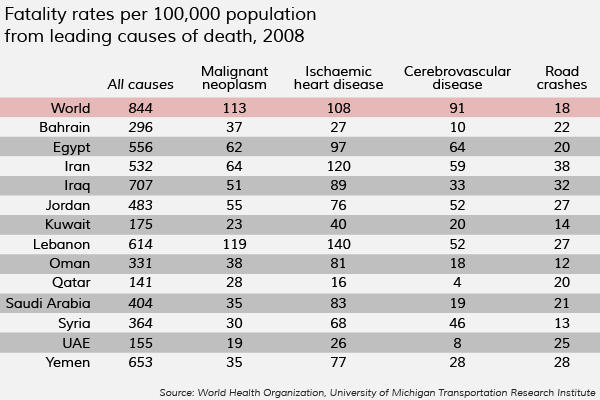 The importance of the latter imperative is documented in the fact that five Middle Eastern nations are in a group of countries where the ratio of reported road fatalities is 50 percent or more above the global average of 18 per 100,000 population. These countries are Iran, Iraq, Yemen, Jordan, and Lebanon.

‘The startup cycle is finally taking off’

Let’s face facts – Lebanon is in a civil war