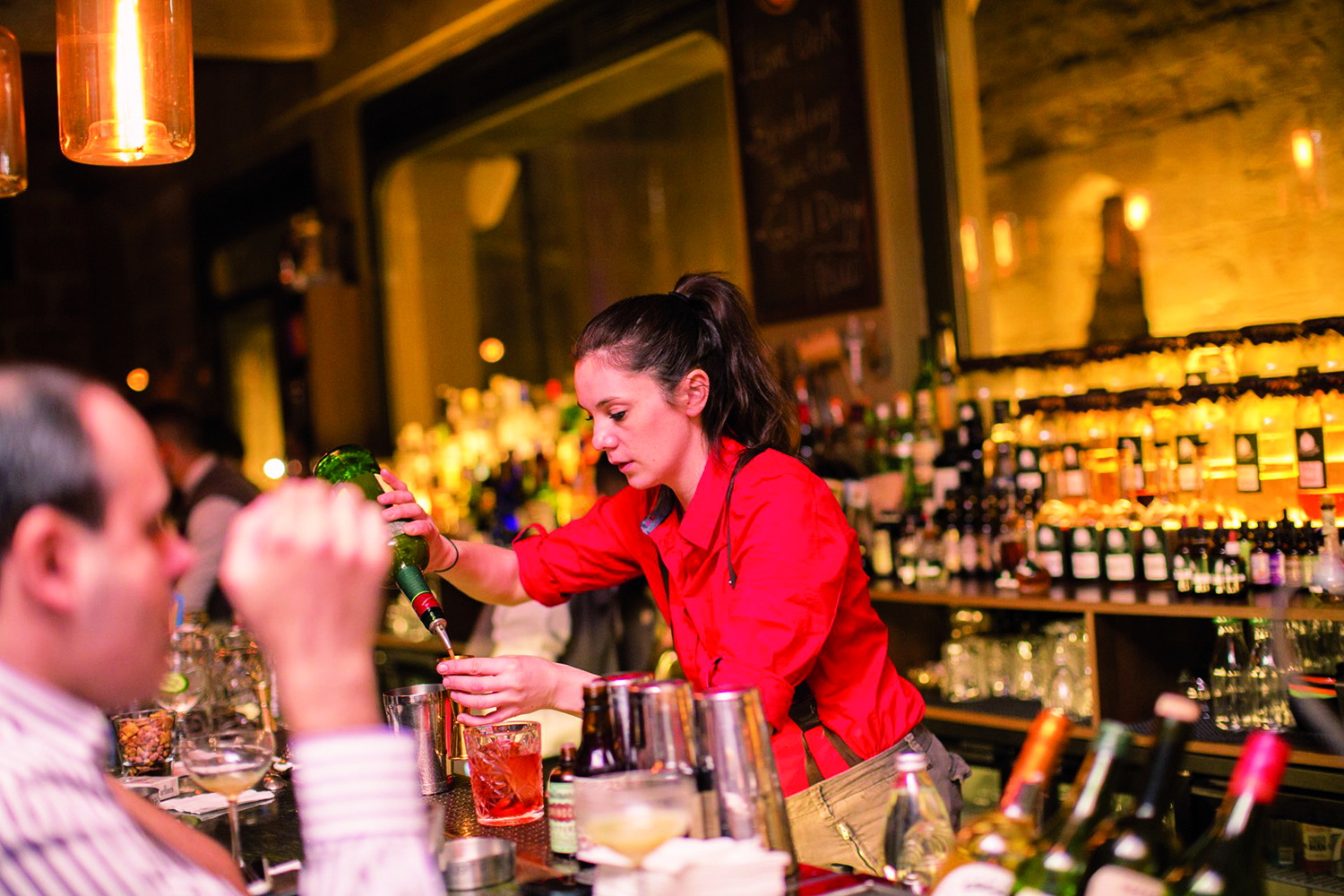 Just like all commodities, alcohol revenues are significantly impacted by successful branding and marketing campaigns. When well-crafted advertisements are relatable to consumers, these promotions ultimately influence their perceptions and increase the product’s popular appeal.

Alcohol distributors Executive spoke to say that Lebanon, in comparison to other countries in the region, is an advertising haven because there are no restrictions on alcohol advertisements in media channels.

As such, they consider extensive expenditure on promoting their portfolio of spirits brands (although spirits distributors declined Executive’s request to provide the total amount spent on advertising per year) to pay off well in sales. “In Lebanon, there is always a strong impact of advertising in terms of driving sales. Advertisements also have a strong impact on top-of-mind awareness, but also on commercial awareness. Our ultimate objective is to build our brand and have a strong and healthy brand performance,” says Ziad Chami, marketing manager at Diageo, the multinational alcoholic beverages company with a portfolio of brands such as Johnnie Walker, Bacardi and Smirnoff.

According to suppliers interviewed for this article, the biggest percentage of their marketing budget is usually spent in December which is, distributors say, typically the busiest month of the year for spirit sales. Carlo Vincenti, owner of G. Vincenti & Sons, characterizes his company’s experience: “The months of November and December usually account for 40 percent of annual sales, so obviously we spend a large chunk of our marketing budget in that period whether in traditional media or consumer promotions and visibility. Since December is marked by festivities with lots of family and social gatherings involving both gifting and consumption of spirits, all brands tend to launch special packs with gifts and special offers then.”

To each brand its own

Lebanese spirits distributors often work with advertising or PR companies to create the ideal promotional campaign and say each brand requires a tailor-made marketing strategy depending on its positioning and the age group of its target clientele. “Every spirit category and even every brand has its own strategy and marketing objectives that could include the traditional media tools or more targeted and flexible ones,” says Vincenti.

Anthony Massoud, managing director of Etablissements Antoine Massoud (EAM), a distributing company with a wide line of spirits including Russian Standard Vodka and Nikka whiskey, says: “Every brand has its own strategy, target audience and complexity. We have more than eighty alcohol brands in our portfolio but we have nine core brands which we focus on in our advertising campaigns.”

Traditionally, mass-media tools such as television, radio spots, print advertisements and outdoor promotions were the most effective means to reach a wide base of consumers. Today, Lebanese spirits distributors still consider these pillar methods for some brands but say they believe there are better, more targeted ways to reach the consumer.

Nahla Haddad, communication manager at Fawaz Holding, a distribution company managing a wide portfolio of brands including spirits such as Chivas Regal, Jameson whiskey and Absolut Vodka, says they don’t heavily advertise their spirits portfolio on television for several reasons.

To begin with, according to Haddad, most of the global brands they represent lack advertisements which are localized for the Lebanese market. Moreover, television requires a huge advertising budget which they can more effectively spend on other more engaging media. “Finally, for brands such as Jameson whiskey or Absolut Vodka, the target audience doesn’t watch local television and so we prefer to appear where the target is,” explains Haddad.

Massoud says he prefers hosting PR events and tastings – where they invite the media and select consumers – to advertisements on television or billboards. “Our marketing is very much PR driven as its effect is sometimes stronger than advertising because here you are talking to the consumer directly and increasing the word of mouth effect which is very important in Lebanon. In mass media, you might reach people who are not interested in your brand, but with PR and events you are getting your message across directly to a few people that represent a lot to your brand rather than the masses who might not be interested,” explains Massoud.

The rise of digital media

Discussions with distributors did not indicate the collapse of traditional advertising methods, only their supplement with more engaging forms of advertisement. “In general, traditional advertising is still a key part of our advertising mix. But, over the last few years, we have become more active on social and digital media, which is a trend that is happening all over the world and is becoming a more important part of the mix,” says Chami.

Davina Atallah, creative director at Leo Burnett which works with Diageo on advertising in Lebanon, says they found a creative way to engage consumers through a mix of social media and outdoor advertising in Johnnie Walker’s Keep the Flame Alive campaign.

In that campaign, recalls Atallah, they asked members of the public across Lebanon why they believe it is worth staying in the country; Leo Burnett then had a fire calligrapher flame-write these statements on the spot, took pictures of the final results and uploaded them on social media. They also released these flame-written statements on LED billboards across the country. “It was an evolution in terms of the brand, from the Keep Walking campaign which focused on stories of well-known Lebanese to a story about the resilience of the Lebanese people [through the Keep the Flame Alive campaign], creating an interaction with them which we had never done before,” says Chami.

Haddad says social media has allowed them to develop a two-way channel of communication with their consumers, while also reaching out to the younger generation for brands such as Ballantine whiskey which were commonly associated with an older generation in Lebanon. For the launch of Ballantine limited edition “Beirut” bottle, Fawaz Holding asked people to share pictures reflecting the true spirit of Beirut on the company’s social media pages. The pictures were then reproduced with an image of Ballantine’s Beirut bottle embedded in them and the name of the photographer who took them mentioned on Fawaz’s social media pages. Those with the best pictures, as voted by Fawaz’s communications team, won the limited edition bottle. “Within three weeks, we were able to increase our fan base, recruit a younger audience and enforce brand awareness,” says Haddad.

The mass and the direct

For categories with a wide appeal to consumers, such as vodka, a mass-marketing approach emphasizing their association with a party spirit works best, explains Massoud. Therefore, Massoud says they invest in sponsorships of design events across Beirut and parties such as Decks on the Beach in the summer or of bars such as the new Pacifico (where they have a banner above the bar).

Vincenti also invests in hosting parties with international DJs through Poliakov, a vodka brand in their portfolio, but they are best known for their Jim Beam Rocks musical festival, a now annual event produced by Jim Beam at the beginning of the summer season showcasing local bands as well as one major international act.

On the other hand, according to Massoud, some categories of spirits, such as malt whiskies and wines, are a more refined niche and benefit from targeted marketing involving direct interaction with the consumer. “In single malts, the one-to-one approach is very important. You need to take your time with the consumers, educate and initiate them: it’s a long but solid process. This is why we launched The Malt Gallery (EAM’s specialized whiskey retail store) as it is an ideal platform to talk directly to the consumer,” explains Massoud, adding that this can also be done through tasting plans in other specialized outlets.

Massoud says EAM devises their alcohol marketing campaigns based on whether the particular spirit’s category is consumer or trade driven. With trade-driven brands (mainly used in bars and clubs) Massoud says it is better to invest in the outlets themselves, while with consumer-driven brands interacting directly with the consumers becomes very important.

As such, bartenders and bar owners become the biggest allies of spirit distributors and priority is given to marketing and promotions targeted at influencing spirit choice when preparing cocktails or establishing their bars.

Many spirits distributors invest in bringing brand ambassadors or expert international bartenders to Lebanon to give workshops and training to local bartenders. Some spirits distributors organize worldwide annual mixology (bartending) competitions where the winner of a country-wide contest goes on to represent Lebanon, and their bar, in the international competition. Speaking of the Diageo World Class competitions, Chami says: “The objective is to raise the bar when it comes to mixology and bartending. Sales-wise, World Class creates a strong engagement between the bartenders, and the trade itself, with our brands; it will translate into a stronger performance of our reserve portfolio when it comes to the on-trade.”