Unlike other groups formed in the last months as a response to the closure of Naameh and the ensuing garbage crisis, Hellou Aanna began in 2011 during the Arab uprisings. The calls to action then were very similar to those coming from the movement today, as Ibrahim Dsouki, a journalist and one of the core members of the original group, describes: “At the time, we said we wanted to change this regime, but we wanted to be very clear, as the regime has a face, a name.” Back then, there was no garbage catalyst, but the target remained the same: the political system. The group went so far as to ensure that the color used for its banners was one affiliated with public schools (purple), and not with any of the political parties. Eventually, the group disbanded, and social media accounts were deactivated.

Cut to summer 2015, and members of the group found themselves at the protest on August 22, but merely as individuals. After the police brutality and authority’s aggression, Hellou Aanna decided to re-form. “We saw that the organizers needed help, and we saw that the people going to the streets needed help; we had to play our role,” says Dsouki, who recognizes that even the structure of organizing society needs to change. “People in Lebanon don’t trust parties anymore, and no-one wants a new leader – they have a problem with people in authority right now.” In a similar manner to other groups, Hellou Aanna is governed by a council based hierarchy, with key members who form a core to the group. Dsouki insists that individuals who represent the group at coordination committees and in the media speak with the full support, trust and permission of all other members. This “trust” Dsouki speaks of is integral to the group’s operation as core members, he says, are trusted to make on-the-spot decisions. This also affords certain key members with sensitive positions of employment a condition of anonymity, as they would otherwise experience harassment at work, says Dsouki, explaining, “There are people with us who work with Solidere, for example, because in Lebanon you don’t have many choices [of employment], and a lot of people in the street say things against Solidere.” 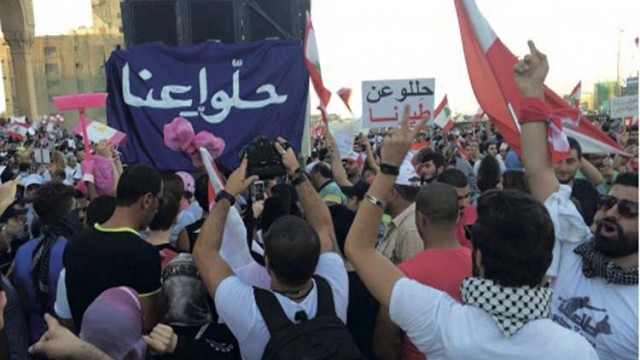 The structure of funding, and the limitations of such, also follows a similar structure to that of You Stink, with no donations accepted from institutions or NGOs, and strictly no contact with any people inside or affiliated with the government. The group also implements a cap of $500 per donation and records all financial transactions, though at the time of writing these records have not yet been made public. “Most of the donations come from people within the group, especially from those who cannot be visible leaders of the protest movement.” Since the group is smaller than You Stink, it reasons that an Indiegogo platform is unnecessary. According to Hellou Aanna, You Stink is better organized because it had more time to prepare in the lead up to August 22. Dsouki also comments that donations to Hellou Aanna come in all forms, with volunteers offering blank placards, water or T-shirts to the group at the protests.

Meeting attendance is variable, but he expresses a desire for consistency, especially when wanting to maintain good relations with the other groups. Dsouki stresses that Hellou Aanna plays an “important role in bringing together [the larger groups]” because they at times have differences in opinion. “Each group has its own agenda and its own way of working,” says Dsouki, who points out how friction within the movement was felt on August 29, when different groups called for protesters to gather at either Riad el-Solh or Martyr’s Square. Dsouki thought it “unacceptable” that conflicting calls were made to the public, so he claims that Hellou Aanna played a conciliatory role to bring the other groups together and “keep the movement united.” Different groups often organize additional activities, although Dsouki stresses that the importance of coherence is tantamount in group activities, which Hellou Aanna has prioritized over pursuing independent action. “We said that it’s better if we work all together,” and thus prefers bringing suggestions to the coordinating committee for the entire movement.

[pullquote]Dsouki singles out the electoral law as the source of much of lebanon’s misery, which does not allow for proportional representation[/pullquote]

Their demands focus on the country’s most pressing issue at hand which recently has centered on the garbage crisis. “The people will trust us more if we can help them bring this issue to an end,” Dsouki explains. The resignation of the Minister of Environment, Mohammad Machnouk, is one of the group’s key demands. At the same time, the group is keen to stop the “government’s thievery and corruption,” and ensure a garbage solution which is “good for the environment,” which he fears will not be sought by the politicians, who will only seek to line their pockets. “Our priority is to stop corruption, and bring to justice the people who do this. It is a long-term process; it’s not going to be easy,” especially as Dsouki says that corruption has infected every institution in Lebanon. Unless corruption is addressed head-on, nothing will change.

He promises a strong future for Hellou Aanna, as the general public has concerns that go beyond garbage, such as electricity and water. Dsouki singles out the electoral law as the source of much of Lebanon’s misery, which does not allow for proportional representation in voting and promotes sectarianism. “[The government] doesn’t use this electoral law [of proportional representation] in Lebanon because it wants to eliminate all its enemies,” a point which Hellou Aanna wishes to tackle in the future. It proposes that the government act as a temporary ‘caretaker’ government in case of a snap resignation of ministers and a new round of voting. Indeed, voting according to sect is damaging Lebanon. It is a way of categorizing that Dsouki thinks will “always bring us towards civil war.” Indeed, he firmly blames corruption not on a liberal system of economics or an inherent product of the private sector, but wholly on the culture of sectarianism. Restoring trust in any organising body, believes Hellou Aanna, is therefore what will encourage the breakdown of Lebanon’s sectarian walls.