Bedna Nhasseb, one of the larger groups leading the popular movement alongside You Stink, was also formed in response to the violent crackdown on protesters. Their name follows one of their core demands: accountability for the actions of the police on August 22. The group traces the origin of the garbage crisis back to 1993, when the Beirut municipality rescinded control of the finances to determine how the garbage from the capital would be treated.

Wael Abdallah, an engineer and activist with Bedna Nhasseb, explains to Executive that although the group is new, many of its core members worked together previously as part of a different protest movement in 2011. The lack of space afforded to them by other groups led them to re-form as an offshoot; “[You Stink] prefer to work in a closed group,” claims Abdallah. “We tried many times to establish bonds with them but failed, so we came together ourselves.” However, Bedna Nhasseb is not too concerned about the apparent cracks within the movement, as Abdallah believes that disagreement promotes a better overall direction. “It would be ideal to have all the groups united in one group, but it’s not possible, and actually differences are not [necessarily] bad for the movement. It is a healthy thing to have people thinking in different ways, aiming to reach the same goal at the same time,” he says.

Although other groups have expressed their frustration at the discord that is present within the movement, Abdallah and Bedna Nhasseb clearly have a different take on the friction, and he compares the movement towards on-the-ground action as a healthy “race” between the groups. Abdallah nevertheless insists that the group maintains a good relationship with the other protest groups and “looks for intersections” when planning actions. Unlike some of the other groups who source external donations, Bedna Nhasseb receives most of its capital from current members as a self-funded group. “We gather from each other, we do not have these big costs and we are sensitive regarding donations,” explains Abdallah, who notes that currently external funding is not needed as their activities are not that costly and materials can be sourced from connections they have as individuals.

Abdallah also speaks of Bedna Nhasseb’s anger at the comments of Nicolas Chammas, Head of the Beirut Traders Association, who called for the protesters to leave Downtown Beirut in the wake of damage to property and commercial interests as he feared they would turn Downtown into an area for “Abu Rakhousa” folk (a derogatory slang term referring to people from poorer economic backgrounds.) In response to the comment, the Bedna Nhasseb called for an “Abu Rakhuosa” flea market to take place in Riad el-Solh to “reclaim Downtown for the people,” which the group feels has been “robbed” from them. The group, which includes many members of self-identified leftists, notes that many critics of the movement try to reduce the group to its anti-capitalist principles and of seeking to “bring the shadow of communism” over the entire movement, predominantly to frighten non-participants and spin the focus to that of a class war. Indeed, despite outward appearances, Abdallah insists that every level of Lebanese society, including businessmen and capitalists, has been tricked by the political class. He cites the example of Neemat Frem, former President of the Association of Lebanese Industrialists who Abdallah claims was tricked, leaving him “unable to trust the political system” during the garbage bidding process. This leaves little hope for those individuals without money, influence or power, he says. With regards to Lebanon’s political class, Abdallah quips that, “In Egypt there was one Hosni Mubarak. In Lebanon we have eighteen sects; we have at least eighteen Hosni Mubaraks.” 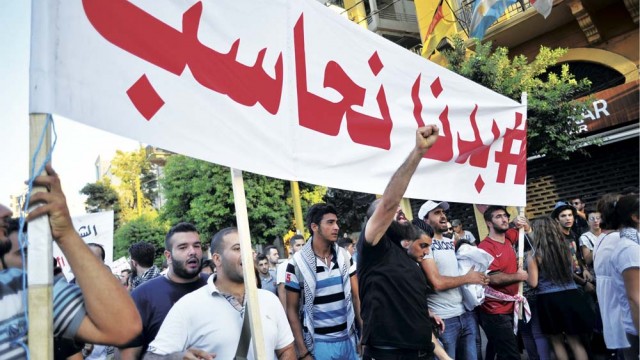 The group’s core demands focus on the garbage and corruption, but steer clear of demanding the immediate departure of several government ministers due to the pyrrhic nature of such a victory. “We are not insisting on the resignation of a minister, because in our vision the resignation of the minister doesn’t give us any tangible credit. We can ‘see’ it, [but only] as a small victory, which took a lot of effort,” he says. This, the group insists, detracts from targeting the real source of all these issues, which is the current political class and the systemic corruption woven into the fabric of society. “We need to change the electoral law because the parliament is the source of everything that is happening in the country. We do not have a vision to make a change through violence,” he continues. Corruption then, is the focus of their energy. This demand is reflected in Bedna Nhasseb’s actions such as their September 29 protest outside the Ministry of Energy and Water against corruption and waste in the government’s management of electricity.

Roughly four to twelve core members attend the group’s meetings. “We trust each other, because we have experience with working together. We believe in what we [as a group] are doing,” regardless of whether individuals agree or not, says Abdallah. This follows with representation at the coordination committee, which is dependent on who is available at the relevant time. Abdallah believes that peak membership of the group happened on August 29, when up to 150,000 people marched under the banner of Bedna Nhasseb during the rally. However, the individuals who protest and are present during the rallies are not the key to the downfall of the corrupt Lebanese system. “Once you take the decision to go to the street you are somehow freed and liberated. What we hope to do is target those who remain at home and inactive, the ‘silent majority’, who is looking for the right time to participate in the movement,” he says. Encouraging citizens to overcome this fear of participation, which other groups have expressed is a symptom of Lebanon’s sectarian nature, is one of the main challenges Bedna Nhasseb faces. “Our main job,” says Abdallah, “is not to create a revolution – a revolution can only be created through people. We are more or less the catalysts of a chemical reaction. We can only help trigger the revolution.”