An awakened anger against the Lebanese government’s corruption and ineptitude has given birth to a growing country-wide popular movement. Young and old, rich and poor, political and apolitical, the movement has seen all sorts of people take part. But what these protesters do have in common is one very important thing: they are not coming to the streets under divisive sectarian or political banners. Rather, they are coming down united against a government which has swamped them and their country in garbage for over two months now, all the while lining their pockets and washing their hands of any responsibility.

Executive sat down with representatives of five groups that have either formed or reformed since the beginning of the protests to find out who they are, what their demands are and what they hope the future holds for them and for Lebanon.

These groups have been in the media and public limelight for the past couple of months, and, while many of them prefer to be seen as facilitators of the movement rather than leaders, they understand that their organizing has placed them in a position where they must be held to account for their words and actions. Simply opposing the government’s proposed solution to the garbage crisis was not enough. So, on September 28, representatives from each group attended a press conference in Beirut in which they put forward an alternative solution to the garbage crisis with the help of key environmental experts. The main points of the plan stipulate that all garbage that has been thrown in open dumps must be collected, local municipalities must take over responsibility of sweeping, collecting garbage and recycling, and that clear conditions on waste management must be put in place by the Ministry of Environment, supervised by the Ministry of Interior, civil society organizations and environmental experts.

How the detailed plan is received by the government and the wider public is yet to be seen. But what is clear is that these groups mean business, and not business as usual. They have had enough of empty rhetoric and false promises, and are willing to work hard to make sure the anger expressed on the streets this summer is translated into tangible change.

Page 2: Akkar Manna Mazbale (Akkar is Not a Dumpster)

Stirred by the growing popular movement against this summer’s garbage crisis, a group of young people from Beirut decided to come together to support the larger groups such as You Stink by doing something a little different. After days of informal meetings to bounce ideas back and forth, and following the unprecedented police crackdown on August 22 and 23 on mostly peaceful protesters, the August 22 Youth group was officially formed, Facebook page and all.

Mahmoud Abouzeid, a communication studies graduate and core member of the group, says the catalyst for the official formation of the group was the media’s reaction to a group of youth protesters on August 23 who were labelled as mondaseen, ‘infiltrators’, a derogatory term used to categorize youth from poor, marginalized areas. “Those people are the essence of the protests, they are willing to give everything…they have nothing,” says Abouzeid. And so the group was formed with the aim of offering a different perspective than that put forward by much of the mainstream media.

The group is formed of a dozen or so core members who attend regular meetings, usually three to four times a week, and coordinate with the other groups to plan protests and direct actions. Beyond these core members, new faces come and go, volunteering their time if and when they can. Within the core group, there is no hierarchy or leadership, but each person is assigned a specific role – such as media coordination – to make the group’s work more efficient and organized. Coordination meetings with the other groups happen on a daily basis, though the August 22 Youth group does not always have someone present there, preferring to spend its time on the streets. Financially, Abouzeid says the group is not collecting external donations because it so far has no need for them. Rather, group members donate from their own pockets to pay for things such as printing and posters. 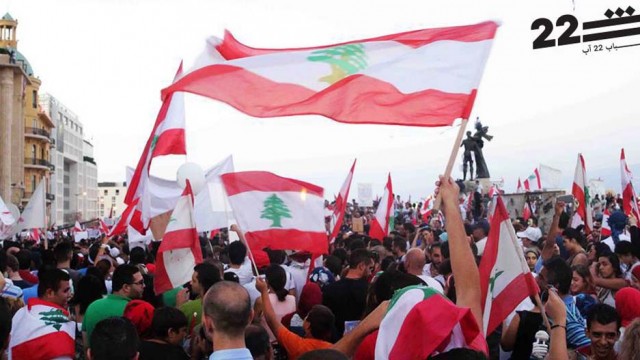 While the group agrees with the demands put forward by other groups, it has chosen also to deal with a slightly different set of priorities. One main focus point is to work closely with Beirut’s most marginalized youth to ensure their voices are heard in this growing movement. They contacted youth from Beirut’s poorer communities following the violent August 23 protest to hear their take on the situation, and created a joint Whatsapp group to keep them involved in their activities. When several youths were arrested following another protest, the August 22 Youth group went down to the police stations where they were being detained to put pressure for their release. Many of these youths don’t know what their rights are before the law, such as the right to a lawyer when detained. The group’s aim, therefore, is to make sure these individuals are informed of their rights as citizens and are made to feel like an active part of society. The group also offered support to the dozen or so who embarked on a two-week hunger strike (eventually called off on September 17), joining them in solidarity for 24 hours and organising a day of music and unity outside the Ministry of Environment where the hunger strikers were camped out.

The August 22 Youth group has in parallel embarked on a full-swing social media awareness-raising campaign. Using their own expertise and equipment, the group has been shooting interviews with youths from various social and religious backgrounds to discover their personal opinions on the movement. The videos are routinely posted online and shared widely around social media to provide an alternative to the mainstream media which Abouzeid says “just picks what it wants to show.” Moreover, it is important that the voices of these youths be acknowledged by the public as being as intrinsic to the movement as those of the well-known leaders from the larger groups. The group would eventually like to turn these interviews into a short documentary about the growing social movement.

When it comes to coordinating with the other groups, Abouzeid maintains that the August 22 Youth group tries as much as possible to steer the conversation towards action on the ground. Rather than “wasting time by spending seven hours of a meeting arguing over details,” they could be walking the streets and interacting with people instead. This is where cracks in the movement start to show; when egos take over from real community organizing, says Abouzied, the movement will falter.

A more specific aspect of community-organizing the group is involved in concerns the current environmental crisis. The group understands that in many ways the state has especially failed the country’s poorer citizens, and if the garbage crisis is to be solved in these marginalized communities, it is going to have to come from the residents themselves. “We started an awareness campaign with advice from environmental experts,” says Abouzeid. “It’s very detailed but simple to explain to those people in the communities how to recycle. We are working on an animation, baby steps on how to recycle. We contacted people with experience in recycling. Some of them would collect garbage and then sell recyclable plastic [and other materials], making [money] doing this. We wanted to show people that once you decide to do something, you can do it. You can even benefit from [recycling] financially. You start individually, then it moves to your neighbour, then to the neighborhood and eventually to the city. And, ultimately, this is what’s dangerous to the current system. Once people are aware and know how to solve their own problems, that is when the regime will start falling.” 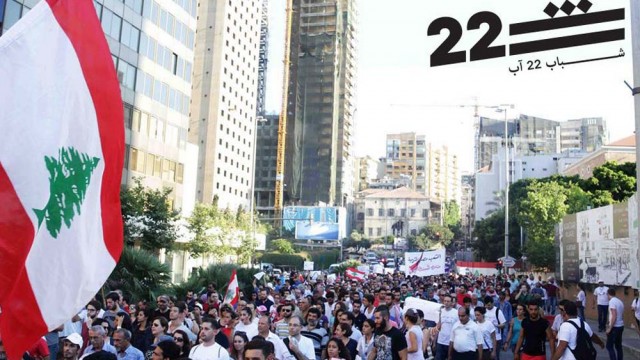 When asked if the group has a coherent political or economical vision for the country, Abouzeid emphasized that, aside from the fact that the group’s members hail from different political backgrounds and therefore there cannot be one distinct ideological vision, the movement itself is far from reaching this stage yet. The youth group is not and does not pretend to be a political party, he says. However, he adds, one way to change the system and tackle corruption would be to reform the electoral law so that citizens could finally vote based on proportionality. A fair voting system would help ensure higher accountability, allowing citizens to put pressure on their elected officials to make sure transparency is enforced, both in the public sphere as well as in the private sector. For now, however, the group’s long term project involves dealing with the country’s waste management, making sure they coordinate simultaneously with the other groups, environmental experts, local municipalities and the public to raise awareness and eventually come to a consensual agreement on how the country’s garbage should be dealt with. “Our aim as a movement should be to achieve a big win,” says Abouzeid, “which will probably be related to the garbage issue. Once we gain this win, we can move on to other demands, such as electricity, and eventually to issues like reforming the electoral law. We need this big first win, however, to gain credibility from the people. This way the people will support us more and, eventually, will move beyond just thinking in sectarian terms. There are other solutions and they can be a part of it.”

The August 22 Youth group is clearly riding a difficult wave; while it wants to be part of the larger movement, its heart lies with the youth in the communities of marginalized neighborhoods. Balancing the two is a challenge, especially when tensions rise and lack of trust between groups and activists is palpable. But reaching a middle ground is the group’s primary concern, says Abouzeid, who insists that individuals in the movement should put their petty differences aside in favour of unity and giving the voice back to the streets.